TORONTO, Oct. 04, 2021 (GLOBE NEWSWIRE) -- Bunker Hill Mining Corp. (the “Company”) (CSE: BNKR, OTCQB: BHLL) is pleased to announce its intention to enter into a joint venture with MineWater Finance LLC (“MineWater”) to explore the mineral potential of the London gold mine, and the surrounding district, in Colorado, USA. London Mining District produced gold and silver from 1875 to 1942, including over 650,000 gold ounces from the London Mine

Sam Ash, CEO of Bunker Hill Mining, stated: “We are delighted to announce this partnership with MineWater to explore the prospective London Mining District in Colorado. This aligns with our strategy to grow the value of our company via the regeneration of closed and undervalued precious metals assets in North America in ways that leverage advanced mining, governance and sustainability practices. This partnership combines Bunker Hill’s mining expertise with MineWater’s superb track record of environmental remediation and stewardship, which is key to sustainably revitalizing historic mining districts. While our near-term focus and capital allocation priority continues to be the rapid restart of the Bunker Hill Mine, and its subsequent organic development, we are very excited to add this new option to our North American value-creation pipeline.”

The Company has signed a term sheet to enter into a joint venture with MineWater, the current owner of the London Mine and associated land package totaling over 3,000 acres of patented ground. Under the terms of the agreement, the Company has the option to invest up to US$3 million over a four-year period to earn a 50% ownership position in the joint venture. Upon completion of the definitive agreement, a Board of Directors will be formed to govern the joint venture, to be comprised of 3 members to be appointed by the Company, and 2 members to be appointed by MineWater.

MineWater acquired the surface, mineral and water rights to the London Mining District in 2016 in exchange for performing environmental remediation of the site that improved water quality to meet regulatory requirements. By 2017, the State of Colorado declared the remediation work successful.

MineWater LLC, the sister company of MineWater Finance LLC, performed the environmental remediation work at the London Mine, where it has also developed water resources subsequently purchased by the City of Aurora. Remediation, coupled with dewatering of the London Mine, has been highly beneficial to the environmental status of Mosquito Creek as shown by the EPA (NPDES) publicly available database. MineWater LLC was founded in 2016 by Joseph Harrington, who has been awarded 6 US patents for environmental technologies to address in situ metals immobilization in underground mines, pit lakes and groundwater impacted by mining. Using these patents and other technologies, MineWater LLC solves water issues related to mine sites, particularly arising from the mobility of dissolved heavy metals. Prior to their work at London Mine, the principals of MineWater LLC successfully remediated the Globe Smelter Superfund Site in Denver, Colorado. MineWater has also developed water treatment plants for emergency response programs at the Gold King Mine and the Captain Jack Mill/Big 5 Mines Complex, both US EPA Superfund Sites in Colorado, USA, and is currently designing the in-mine water treatment system at the Bunker Hill Mine.

The agreement remains subject to final definitive documentation and due diligence and is expected to close by the end of 2021.

LONDON MINE AND DISTRICT OVERVIEW

Located approximately 70 miles southwest of Denver, Colorado in Park County, the London Mine lies at an elevation of 11,000’ up south Mosquito Creek from the town of Alma. The London Mine sits in the heart of the Colorado Mineral Belt, the prolific lineament stretching NE to SW across the state and is directly adjacent to the historic Leadville mining district. The Climax molybdenum mine is located just 5 miles north of the London mine workings and many of the same district scale structural features can be traced between the properties. 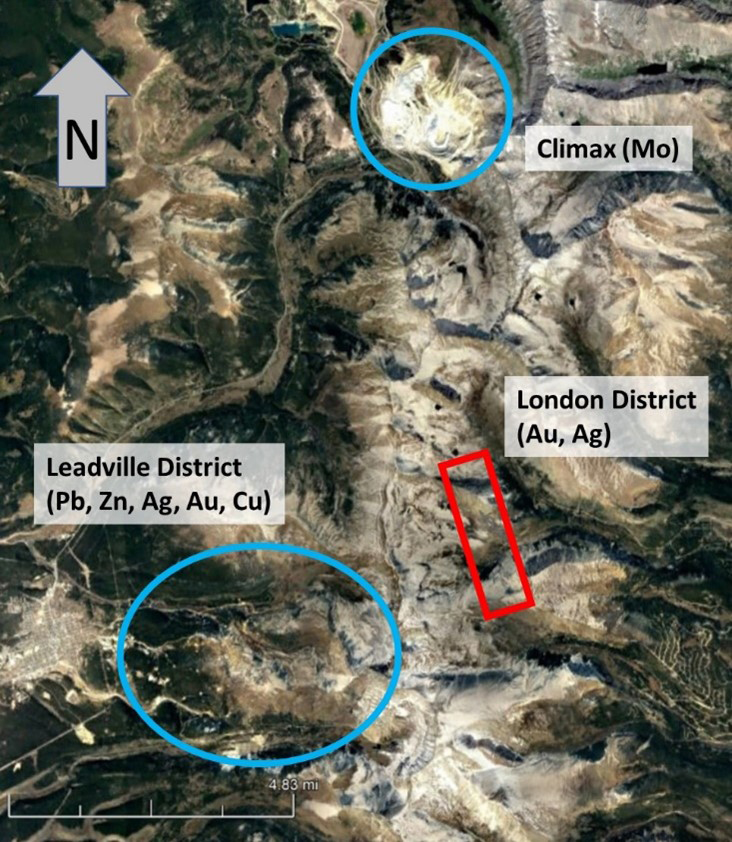 The London mine had been in full production from 1875 to 1942, producing over 650,000 gold ounces from more than 3km of strike length on multiple gold-quartz vein structures. Production ceased due to metals prices and government production restrictions related to the War Powers Act. Small-scale mining operations continued after the cessation of WWII through the end of the 1970’s and exploration activities were undertaken through 1991, when the exploration agreement on the property was finally dropped by Lessees.

Exploration interest during the 1980’s saw numerous groups operating programs across the district and their work laid the basis for developing a historic reserve (non-NI 43-101 compliant) estimate on the Property of roughly 120koz Au as Proven and Probable Reserves with an additional 101koz Au as Possible Reserves in 1987 by Cobb Resources and Chrome Corp (operating as the London Mine Joint Venture), a former Lessee (the “1987 reserves”). All majority of the 1987 reserves are contained within the historic London Mine footprint and are potentially accessible from existing development

Through the investigation of historical exploration and production reports, the Company has identified 3 main zones to target with future exploration. From north to south, these are the Ag-Pb-Zn-Cu (Base-Metal Sulphide) Replacement area, West London exploration area and the South Butte veins. Each of the 3 zones represent different styles of mineralization and warrant separate exploration methodologies. The shallow nature of the northern base-metal sulphide replacement zone and the Au breccias of the West London area allow for surface drill operations and are deposit styles with previously proven geophysical responses in the District. MineWater is planning for separate tunnel development efforts over the next 2 years targeting the West London Zone for synergistic mineral and water resource development. This planned effort will save the JV costs and place underground workings directly beneath historic high grade gold mineralized intercepts 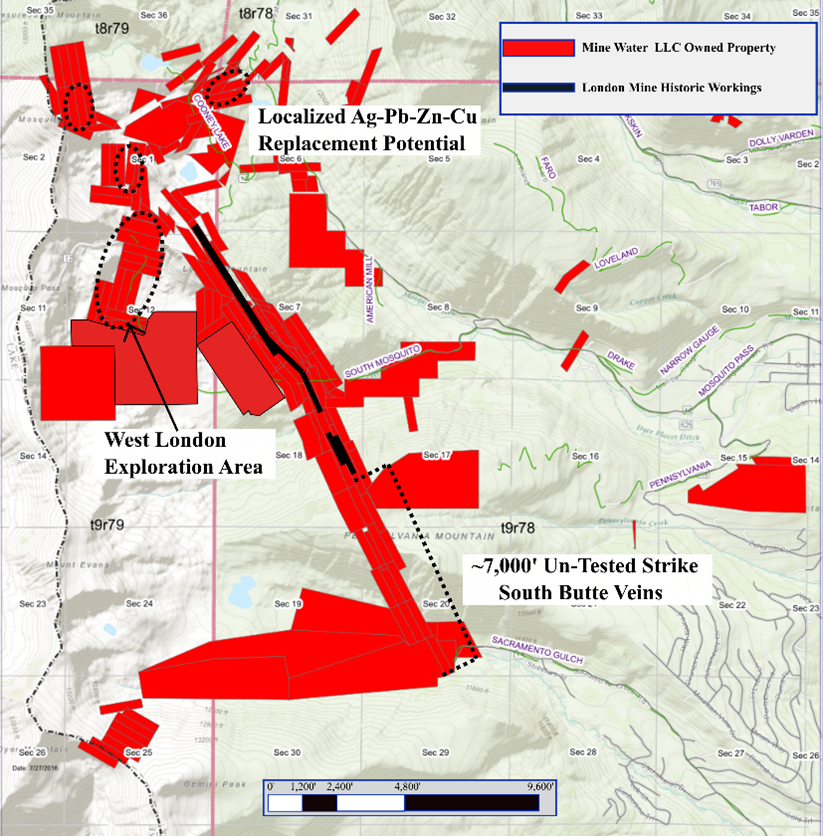 The South Butte area is a direct extension of known vein structures from the Butte Mine. Results from a 1988 exploration mapping and drilling program proved the down-plunge extension of Au mineralization beyond historic workings which remains open both along strike, over 7,000’ of patented ground to the south, and also at depth. The relatively recent rehabilitation work on historic development will allow for rapid re-entry to the area and continuation of exploration drilling.

Figure 3: Section view through the London Mine showing depth profile and location of identified exploration zones relative to historic development.

Similar to work already completed at the Bunker Hill Mine, the next steps will be to compile and geo-reference historic data on the property into 3D space. Modeling historic workings and drill data related to the London Mine across the district will allow for more detailed exploration drill planning and remote sensing program assignments to be ready for future field seasons.

Mr. Scott E. Wilson, CPG, President of Resource Development Associates Inc. and a consultant to the Company, is an Independent “Qualified Person” as defined by NI 43-101 and is acting at the Qualified Person for the Company. He has reviewed and approved the technical information summarized in this news release.

ESG Panel: What It Takes To Get It Right?

Under new Idaho-based leadership the Bunker Hill Mining Corp, intends to sustainably restart and develop the Bunker Hill Mine as the first step in consolidating a portfolio of North American precious-metal assets with a focus on silver. Information about the Company is available on its website, www.bunkerhillmining.com, or within the SEDAR and EDGAR databases.

Certain statements in this news release are forward-looking and involve a number of risks and uncertainties. Such forward-looking statements are within the meaning of that term in Section 27A of the Securities Act of 1933, as amended, and Section 21E of the Securities Exchange Act of 1934, as amended, as well as within the meaning of the phrase ‘forward-looking information’ in the Canadian Securities Administrators’ National Instrument 51-102 – Continuous Disclosure Obligations. Forward-looking statements are not comprised of historical facts. Forward-looking statements include estimates and statements that describe the Company’s future plans, objectives or goals, including words to the effect that the Company or management expects a stated condition or result to occur. Forward-looking statements may be identified by such terms as “believes”, “anticipates”, “expects”, “estimates”, “may”, “could”, “would”, “will”, or “plan”. Since forward-looking statements are based on assumptions and address future events and conditions, by their very nature they involve inherent risks and uncertainties. Although these statements are based on information currently available to the Company, the Company provides no assurance that actual results will meet management’s expectations. Risks, uncertainties and other factors involved with forward-looking information could cause actual events, results, performance, prospects and opportunities to differ materially from those expressed or implied by such forward-looking information. Forward looking information in this news release includes, but is not limited to, the Company’s intentions regarding its objectives, goals or future plans and statements, the Company’s ability to restart and develop the Bunker Hill Mine, the Company’s ability to purchase the Land, the Land’s use as security for the Loan, the finalization of the data from the geophysics survey, the utility of the data from the geophysics survey to identify potential near-surface drill targets, the ability for the Company to secure longer-term, non-dilutive financing. Factors that could cause actual results to differ materially from such forward-looking information include, but are not limited to: the ability to predict and counteract the effects of COVID-19 on the business of the Company, including but not limited to the effects of COVID-19 on the price of commodities, capital market conditions, restriction on labour and international travel and supply chains; failure to identify mineral resources; failure to convert estimated mineral resources to reserves; the inability to complete a feasibility study which recommends a production decision; the preliminary nature of metallurgical test results; delays in obtaining or failures to obtain required governmental, environmental or other project approvals; political risks; changes in equity markets; uncertainties relating to the availability and costs of financing needed in the future; the inability of the Company to budget and manage its liquidity in light of the failure to obtain additional financing, including the ability of the Company to complete the payments pursuant to the terms of the agreement to acquire the Bunker Hill Mine Complex; inflation; changes in exchange rates; fluctuations in commodity prices; delays in the development of projects; capital, operating and reclamation costs varying significantly from estimates and the other risks involved in the mineral exploration and development industry; and those risks set out in the Company’s public documents filed on SEDAR. Although the Company believes that the assumptions and factors used in preparing the forward-looking information in this news release are reasonable, undue reliance should not be placed on such information, which only applies as of the date of this news release, and no assurance can be given that such events will occur in the disclosed time frames or at all. The Company disclaims any intention or obligation to update or revise any forward-looking information, whether as a result of new information, future events or otherwise, other than as required by law. No stock exchange, securities commission or other regulatory authority has approved or disapproved the information contained herein.