TORONTO, Sept. 09, 2020 (GLOBE NEWSWIRE) -- Bunker Hill Mining Corp. (the “Company”) (CSE:  BNKR) is pleased to report that the ongoing digitization and 3D modeling of historic geological data has confirmed numerous high-grade Silver exploration targets at its Bunker Hill Mine located in Idaho’s Silver Valley, USA. Based on the enhanced geological understanding, the Company confirms that it is pursuing the high grade silver potential of the Bunker Hill mine as its primary focus. As such, a first high grade silver focused exploration campaign is set to commence in the coming days.

Sam Ash, CEO stated: “This modernizing digitization process, underpinned by the high quality and quantity of the data, has significantly enhanced our geologic understanding and boosted our confidence in the high grade silver potential of the Bunker Hill Mine. We have therefore made silver our primary focus and we look forward to exploring the multiple targets identified to date, starting with drilling from mid-September”.

Following the change in management in early 2020, a digitisation program was launched in Q2-2020 to leverage the historical mine data collected over a 95-year period to identify and prioritize high grade silver targets. Data has been inputted from over 180,000 meters of drilling from 3,500 historic drill-holes and hundreds of detailed historic mine geology maps capturing all major faults and veins, alterations, mineralization and stratigraphy.

Initial modeling has allowed for a reconstruction of rock units and vein structures to their position prior to post-mineral fault offsets, providing a new level of interpretation on controls of mineralization, and enabling projection of vein segments offset by these faults. This in turn has informed the ongoing development exploration targets aimed at specific offsets of veins with historic high-grade silver production and target the exact host rock with the best potential for thicker vein widths.

The 3D geological model created has significantly enhanced the Company’s understanding of the underlying geology, with the following key takeaways:

Planning for the upcoming exploration program is currently being finalized, with the goal of prioritizing silver targets which are close to the surface and in proximity to existing infrastructure.

The previous exploration campaign, conducted in Q2-2020, was focused on confirming the mineralization of the zinc-rich Newgard, Quill and UTZ ore bodies. Drill results have been successfully analyzed and a maiden Inferred resource is expected to be published in the coming weeks.

ABOUT THE HISTORICAL DATA DIGITISATION PROCESS

During the long and continuous operating history of the Bunker Hill Mine, its geologic staff systematically mapped over 150 miles of underground workings, with the data recorded on a standardized series of maps for planning and exploration. In addition, the mine completed over 180,000 meters of drilling from 3,500 drill holes, meticulously recording the findings using the various pre-digital systems available at the time. When major mining operations at Bunker Hill ceased in 1981, these and other relevant data sets were catalogued and preserved at the Bunker Hill Mine, where it has remained, relatively untouched, for the last 40 years.

Following the change in executive management in Q2 2020, and concurrent to a verification program designed to establish a resource estimate for the mineralization contained within the Quill, Newgard and UTZ ore bodies, a data digitisation program was launched to better leverage the historical mine data collected over a period of 95 years in order to identify and prioritize high grade silver targets.

This has enabled the construction of the first 3D geologic and structural models of the Bunker Hill Mine which has enhanced the Company’s understanding of its overall potential as well as improved its ability to more accurately target its underexplored silver.

(1) Correlation of the strongest mineralization with the quartzite lithologies of the M2 Unit of the Upper Revett Formation.

Analysis and review of geologic data and reports in the historic data set revealed that mineralization at the Bunker Hill mine is most strongly correlated to specific lithologies.  Specifically, it has shown that the primary host rock is the thicker quartzite units within the Revett formation, and the M2 unit in particular.

(2) Confirmation of the deposition sequence and the vein types

Figure 4:  M2 quartzite unit of the Revett formation with offsets along post-mineral faults.

CONCLUSIONS AND NEXT STEPS

Fusing the conclusions drawn from this data-rich 3D model with the seminal analytical work done in the final years of the mine’s life has enabled the Company to categorise the exploration potential of this polymetallic mine relative to both structure and primary mineral; and then identify the location of specific galena-quartz or hybrid veins as high-potential silver exploration targets.  Planning for the upcoming exploration program is currently being finalized, with the goal of prioritizing silver targets which are close to the surface and in proximity to existing infrastructure. A first high grade silver focused exploration campaign is set to commence in the coming days.

Mr. Scott E. Wilson, CPG, President of Resource Development Associates Inc. and a consultant to the Company, is an independent “Qualified Person” as defined by NI 43-101 and is acting at the Qualified Person for the Company. He has reviewed and approved the technical information summarized in this news release.

Bunker Hill Mining Corp. has an option to acquire 100% of all saleable assets at the Bunker Hill Mine. Information about the Company is available on its website, www.bunkerhillmining.com, or within the SEDAR and EDGAR databases.

Certain statements in this news release are forward-looking and involve a number of risks and uncertainties. Such forward-looking statements are within the meaning of that term in Section 27A of the Securities Act of 1933, as amended, and Section 21E of the Securities Exchange Act of 1934, as amended, as well as within the meaning of the phrase ‘forward-looking information’ in the Canadian Securities Administrators’ National Instrument 51-102 – Continuous Disclosure Obligations. Forward-looking statements are not comprised of historical facts. Forward-looking statements include estimates and statements that describe the Company’s future plans, objectives or goals, including words to the effect that the Company or management expects a stated condition or result to occur. Forward-looking statements may be identified by such terms as “believes”, “anticipates”, “expects”, “estimates”, “may”, “could”, “would”, “will”, or “plan”. Since forward-looking statements are based on assumptions and address future events and conditions, by their very nature they involve inherent risks and uncertainties. Although these statements are based on information currently available to the Company, the Company provides no assurance that actual results will meet management’s expectations. Risks, uncertainties and other factors involved with forward-looking information could cause actual events, results, performance, prospects and opportunities to differ materially from those expressed or implied by such forward-looking information. Forward looking information in this news release includes, but is not limited to, the Company’s intentions regarding its objectives, goals or future plans and statements. Factors that could cause actual results to differ materially from such forward-looking information include, but are not limited to: the ability to predict and counteract the effects of COVID-19 on the business of the Company, including but not limited to the effects of COVID-19 on the price of commodities, capital market conditions, restriction on labour and international travel and supply chains;  failure to identify mineral resources; failure to convert estimated mineral resources to reserves; the inability to complete a feasibility study which recommends a production decision; the preliminary nature of metallurgical test results; delays in obtaining or failures to obtain required governmental, environmental or other project approvals; political risks; changes in equity markets; uncertainties relating to the availability and costs of financing needed in the future; the inability of the Company to budget and manage its liquidity in light of the failure to obtain additional financing, including the ability of the Company to complete the payments pursuant to the terms of the agreement to acquire the Bunker Hill Mine Complex; inflation; changes in exchange rates; fluctuations in commodity prices; delays in the development of projects; capital, operating and reclamation costs varying significantly from estimates and the other risks involved in the mineral exploration and development industry; and those risks set out in the Company’s public documents filed on SEDAR. Although the Company believes that the assumptions and factors used in preparing the forward-looking information in this news release are reasonable, undue reliance should not be placed on such information, which only applies as of the date of this news release, and no assurance can be given that such events will occur in the disclosed time frames or at all. The Company disclaims any intention or obligation to update or revise any forward-looking information, whether as a result of new information, future events or otherwise, other than as required by law.  No stock exchange, securities commission or other regulatory authority has approved or disapproved the information contained herein. 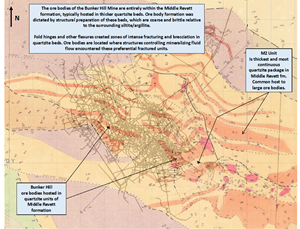 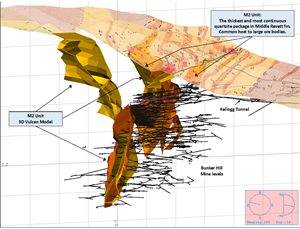 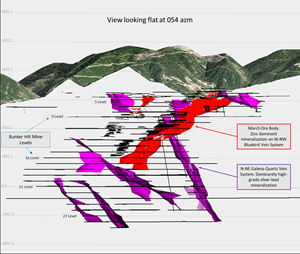 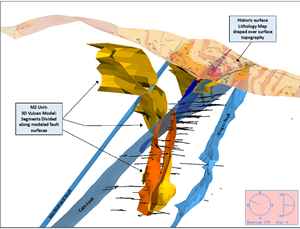 M2 quartzite unit of the Revett formation with offsets along post-mineral faults.