Sam Ash, CEO stated: “It’s been a busy and exciting summer at Bunker Hill, with impressive progress across all project and technical workstreams including mill demobilization, underground development and the Prefeasibility Study.  Given the pace of this development, we look forward to providing our investors with a formal monthly project update going forward.  We will also continue to share our progress through regular video updates.”

UNDERGROUND DEVELOPMENT AT BUNKER HILL MINE

As part of the restart plan, a decline continues to be driven from ‘5 Level’ (the highest accessible level of the mine) to ‘6 Level’.  The decline had advanced approximately 1,100 feet through the end of July, with supporting muck bays and sumps and with a second ventilation fan in the process of being installed. On breaking through to 6 Level the mine plan envisages rehabilitation of pre-existing decline infrastructure that already connects to 8 Level, a substantial time and capital saving, as the next stage of development.  Upon completion, this will provide access to mineralization to support mine restart activities.

At Teck’s Pend Oreille site, the dismantling and demobilization of the mill significantly advanced in July, with the ball mills, regrind mill, crushers, flotation cells, lime silo, truck scales, pumps, motors, and other ancillary equipment all dismantled and transported approximately ~145 miles to the Bunker Hill site.  The last week of July saw deployment of a 265 ton crane to complete the heavy lifts necessary for extraction of the ball mills, regrind mill, larger flotation cells and the lime silo.  All of these components are now located in the Bunker Hill yard, having been transported intact to preserve integrity and to simplify recommissioning (with the exception of the mills which have been separated from their respective motors and trunnions).  Remaining work at the Pend Oreille site will focus on the loading and transportation of numerous spare parts, built-in overhead cranes, laboratory equipment and the underground jaw crusher.  This remaining demobilization work is expected to be substantially complete by the end of August. 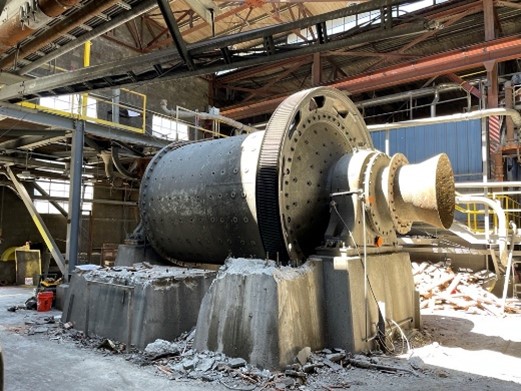 Photo 1:
Regrind mill prior to transport 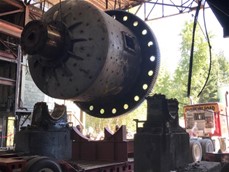 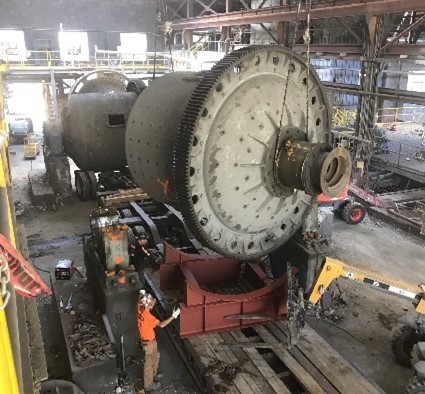 Upon arrival at the Bunker Hill site, mill equipment is being inspected, laid down and inventoried in accordance with requisite storage conditions for each piece.  The previous work of clearing the yard and regaining key real estate is allowing us to place and store equipment outside the areas in which construction will soon begin. Concurrently, a maintenance and renovation program is being derived for the mill equipment.

Other above ground activity has also included a clean-up of the Wardner yard area which will form the base of mining operations for initial production.  The Wardner yard will house future dry facilities and surface storage of the growing heavy equipment fleet, which includes two additional underground haul trucks and an electric jumbo drill. This new equipment will be used to further advance the ongoing decline, remove dependencies on single pieces of equipment, and open up the possibility of simultaneous mine development and mining/sale of ore in the pre-start period.

In partnership with Avista, the local electricity provider, the Company is also finalizing plans and procuring electrical components for a major upgrade of the electrical infrastructure at Wardner to allow a transition from diesel generators to the main electricity grid by early Q4 2022.

A pilot water treatment study is nearly complete, which has involved adjustment of multiple parameters during the critical spring freshet period at Bunker Hill Mine.  This is the period of the year where both water flows and metal concentrations in the mine’s effluent peak.  The result is a significant spike in the metal load of the mine’s effluent that needs to be removed.  The testing program modified target pH levels of the plant’s reactor tank at varying influent flow rates using different types of flocculants to determine the performance capabilities of the plant. The plant’s Lamella clarifier removes metals that precipitate from the mine’s discharge water after being treated with lime and flocculant. The testing program documents the conditions under which this system can and did meet water discharge standards. The pilot system was built at approximately 1/20th of the full-scale plant, for which modifications are now underway using the results of the pilot study.  The pilot plant, the pilot study and the full-scale system design are all being provided by MineWater LLC. 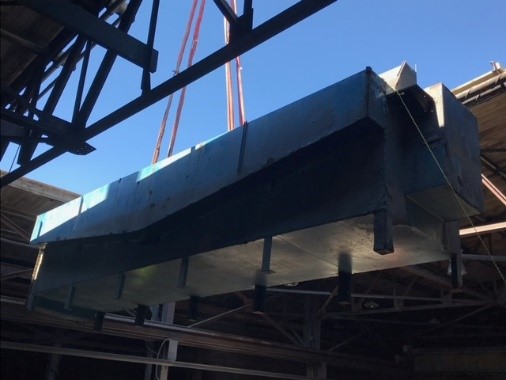 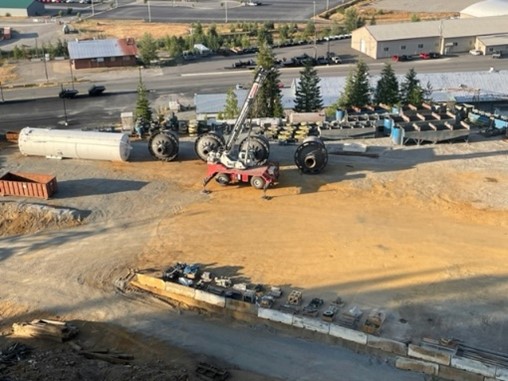 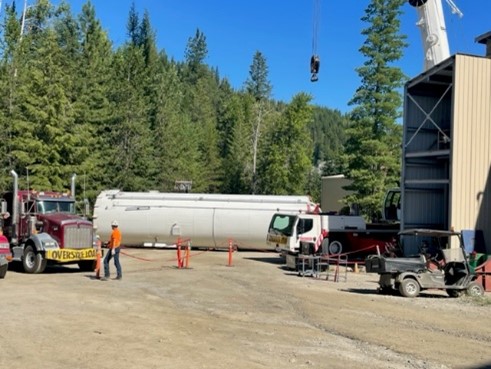 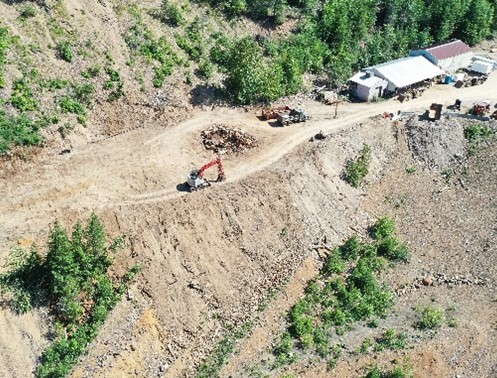 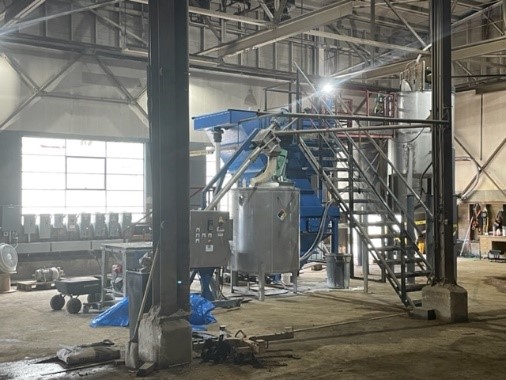 Mill demobilization is expected to be substantially complete over the coming weeks, followed by the commencement of demolition activities.  The Company remains on track to publish the results of a Prefeasibility Study by the end of the third quarter of 2022, and its overall development timeline remains unchanged (see Figure 1 below).  Project progress will be reported on a monthly basis going forward. 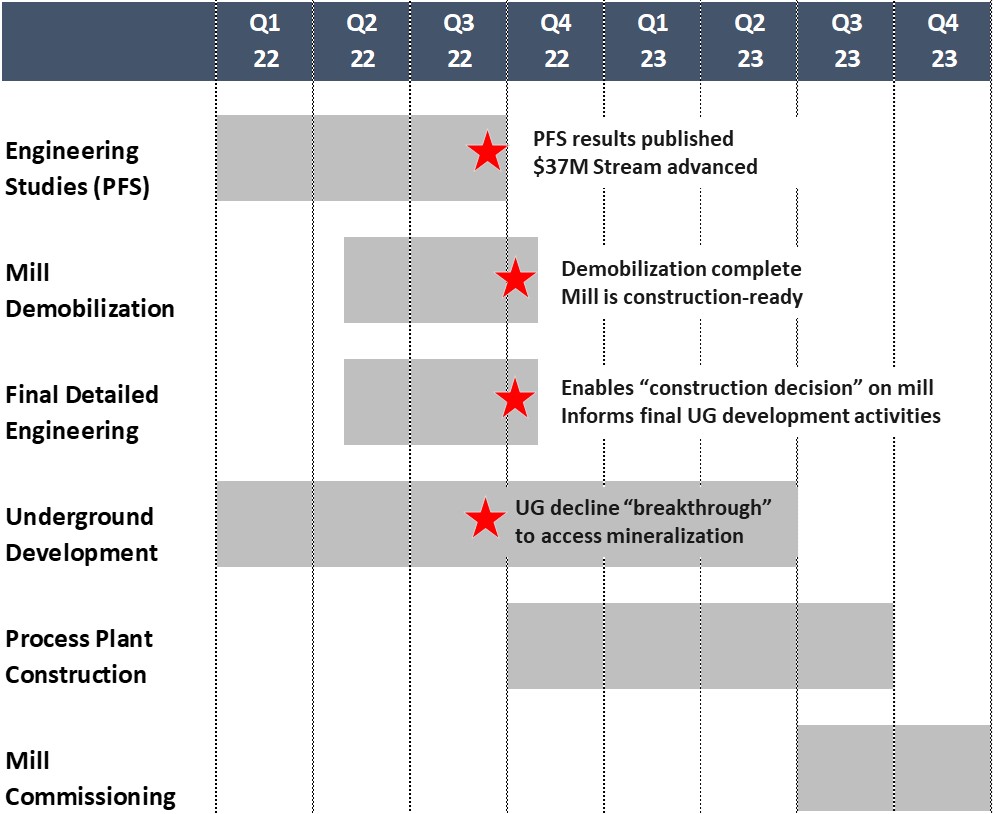 Mr. Scott E. Wilson, CPG, President of RDA and a consultant to the Company, is an independent “qualified person” as defined by NI 43-101 and is acting as the qualified person for the Company. He has reviewed and approved the technical information summarized in this news release.

Forward looking information in this news release includes, but is not limited to, the Company’s intentions regarding its objectives, goals or future plans and statements, including statements relating to the Bunker Hill mine project restart, underground development, demobilization activities, surface activity, the pilot water study, the timing and completion of a pre feasibility study, the timing and completion of a proposed $37m stream, overall development timeline and other matters relating to the Bunker Hill mine. Factors that could cause actual results to differ materially from such forward-looking information include, but are not limited to: the ability to predict and counteract the effects of COVID-19 on the business of the Company, including but not limited to the effects of COVID-19 on the price of commodities, capital market conditions, restriction on labour and international travel and supply chains;  failure to identify mineral resources; failure to convert estimated mineral resources to reserves; the inability to complete a feasibility study which recommends a production decision; the preliminary nature of metallurgical test results; the Company’s ability to restart and develop the Bunker Hill Mine and the risks of not basing a production decision on a feasibility study of mineral reserves demonstrating economic and technical viability, resulting in increased uncertainty due to multiple technical and economic risks of failure which are associated with this production decision including, among others, areas that are analyzed in more detail in a feasibility study, such as applying economic analysis to resources and reserves, more detailed metallurgy and a number of specialized studies in areas such as mining and recovery methods, market analysis, and environmental and community impacts and, as a result, there may be an increased uncertainty of achieving any particular level of recovery of minerals or the cost of such recovery, including increased risks associated with developing a commercially mineable deposit with no guarantee that production will begin as anticipated or at all or that anticipated production costs will be achieved; failure to commence production would have a material adverse impact on the Company's ability to generate revenue and cash flow to fund operations; failure to achieve the anticipated production costs would have a material adverse impact on the Company's cash flow and future profitability; delays in obtaining or failures to obtain required governmental, environmental or other project approvals; political risks; changes in equity markets; uncertainties relating to the availability and costs of financing needed in the future; the inability of the Company to budget and manage its liquidity in light of the failure to obtain additional financing, including the ability of the Company to complete the payments pursuant to the terms of the agreement to acquire the Bunker Hill Mine Complex; inflation; changes in exchange rates; fluctuations in commodity prices; delays in the development of projects; capital, operating and reclamation costs varying significantly from estimates and the other risks involved in the mineral exploration and development industry; and those risks set out in the Company’s public documents filed on SEDAR. Although the Company believes that the assumptions and factors used in preparing the forward-looking information in this news release are reasonable, undue reliance should not be placed on such information, which only applies as of the date of this news release, and no assurance can be given that such events will occur in the disclosed time frames or at all. The Company disclaims any intention or obligation to update or revise any forward-looking information, whether as a result of new information, future events or otherwise, other than as required by law.  No stock exchange, securities commission or other regulatory authority has approved or disapproved the information contained herein.

This press release has been prepared in accordance with the requirements of the securities laws in effect in Canada, which differ from the requirements of U.S. securities laws. Unless otherwise indicated, all resource and reserve estimates included in this press release have been disclosed in accordance with NI 43-101 and the Canadian Institute of Mining, Metallurgy, and Petroleum Definition Standards on Mineral Resources and Mineral Reserves. NI 43-101 is a rule developed by the Canadian Securities Administrators which establishes standards for all public disclosure an issuer makes of scientific and technical information concerning mineral projects. Canadian disclosure standards, including NI 43-101, differ significantly from the requirements of the United States Securities and Exchange Commission (“SEC”), and resource and reserve information contained in this press release may not be comparable to similar information disclosed by U.S. companies. In particular, and without limiting the generality of the foregoing, the term “resource” does not equate to the term “reserves”. Under U.S. standards, mineralization may not be classified as a “reserve” unless the determination has been made that the mineralization could be economically and legally produced or extracted at the time the reserve determination is made. The SEC’s disclosure standards normally do not permit the inclusion of information concerning “measured mineral resources”, “indicated mineral resources” or “inferred mineral resources” or other descriptions of the amount of mineralization in mineral deposits that do not constitute “reserves” by U.S. standards in documents filed with the SEC. Investors are cautioned not to assume that any part or all of mineral deposits in these categories will ever be converted into reserves. U.S. investors should also understand that “inferred mineral resources” have a great amount of uncertainty as to their existence and great uncertainty as to their economic and legal feasibility. It cannot be assumed that all or any part of an “inferred mineral resource” will ever be upgraded to a higher category. Investors are cautioned not to assume that all or any part of an “inferred mineral resource” exists or is economically or legally mineable. Disclosure of “contained ounces” in a resource is permitted disclosure under Canadian regulations; however, the SEC normally only permits issuers to report mineralization that does not constitute “reserves” by SEC standards as in-place tonnage and grade without reference to unit measures. The requirements of NI 43-101 for disclosure of “reserves” are also not the same as those of the SEC, and reserves disclosed by the Company in accordance with NI 43-101 may not qualify as “reserves” under SEC standards. Accordingly, information concerning mineral deposits contained in our website may not be comparable with information made public by companies that report in accordance with U.S. standards.